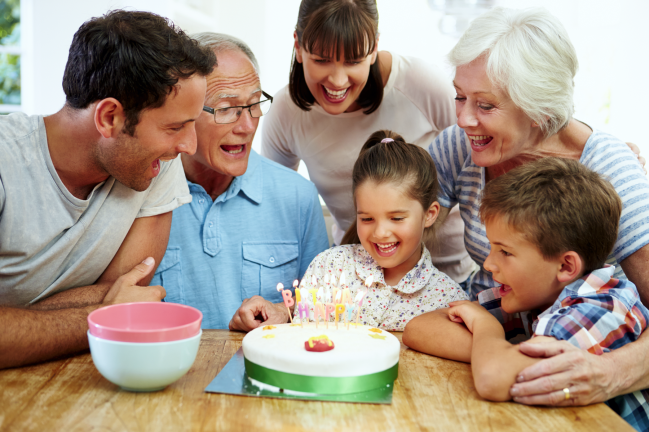 Long, long ago in a city not so far away, my mom came to our house for Thanksgiving Dinner in 1987 or so.  Now, this was not an unusual occurrence.  From the time she arrived in Phoenix in 1978, Mom spent the holidays, both major and minor, with us.  That particular year, however, I got a phone call about an hour after she had left our house, and the conversation went something like this:

Me: “Good Evening, God Bless you.
Mom: “Honey, (pause – – where I could sense near sobs)
Me (with more than a little concern in my voice): “Mom, is everything ok?
Mom (After a big sigh): “Well, actually, I’m feeling a little blue. Do you think we (she and her second husband, Charles) could move in with you?”
Me (with no hesitation): “Of course!”

That was the beginning of a year or so that found my two car garage and one car carport being converted into a “mother in law” suite where Mom and Charles spent the rest of the years they lived in Phoenix with us.  This whole situation/ event did, in a way, set the stage for what began for us in August of 2014.  Below is an excerpt from my Biography, GOD IS MY AGENT, that I will now be using for the basis of this Blog.

During the summer of 2014 Chris (my wife) and I were driving home from our daughter Meredith’s house in Austin, Texas.  It was mid-afternoon and, as usual for that time of day, Chris was napping while I drove.  Sitting there, singing along with some really good yodeling tunes, I was interrupted by God, who said:  “It’s time to start making arrangements to move in with Melissa.”

To say that I found that a little intriguing would be an understatement to say the very least.  Much like Mary in Luke 2:19, I “pondered these words in my heart.” I didn’t say anything to Chris until the next morning when we stopped for breakfast, and the following discussion took place:

The rest of the trip home was spent discussing what form these preparations were going to take.  We decided that we would start cleaning all the junk out of the house (a task we had been “discussing” for years!), and have a realtor come over and give our house an appraisal and tell us what we needed to do get the house ready to be sold.

NOW THIS IS WHERE IT REALLY GETS GOOD!

Two weeks later we were over at Melissa’s house getting ready to go up to our cabin in Flagstaff, when the following discussion took place:

Missy (as the kids were tying up both of the bathrooms):  You know,

when we have the architect come over to see about designing your place, I think I’m going to see if he can’t put another bathroom on this end of the house, too.

Missy (as the kids were tying up both of the bathrooms): “You know,when we have the architect come over to see about designing your place, I think I’m going to see if he can’t put another bathroom on this end of the house, too.”
Me: “Is that architect coming over soon?”
Missy: “As soon as he gets back from vacation.”
Me: “Oh?”
Missy: “Yes. Two weeks ago God spoke to both Matthias and I separately and told us we needed to start making arrangements to have you and Mom move in with us.”

A couple of weeks after this Matthias was driving along, talking with God.  He was wanting to make sure that they should do everything right away, or if they should wait.  No sooner had that thought formed in his mind than he pulled up behind a pick-up truck, and was amazed when he read the truck’s license plate which said:  “Don’t wait!!!”      OOOOOOWEEEEOOOOO!!!

Pretty interesting, huh?  Well, “the rest of the story,” as Paul Harvey would say, is that we now currently live with our daughter and her family in an in law suite attached to their home! Which brings us to the point where I can now elaborate on each of the elements in the title on an individual basis.  Now, as you have undoubtedly already discovered, our situation was a little more a-typical than most, as everyone involved got a direct word from God regarding this issue.  Also, the “reflecting” I will be dealing with here is, of course, our account of how we dealt with the situation.  I trust you will, however, be able to glean at least some “Golden Nuggets” from our experience to employ in your own situation.

WHO – – The “who” I am going to be discussing here is, “who gets the ‘old Folks’?”  Now, in most instances, at least in my family, it is the youngest child who gets “custody,” if you would.  That was the first thing to surprise me about God’s directive to get ready to move in with Melissa – – she is our oldest child.  Now, those of you who know my wife and me know that we would be equally happy with whichever one of our daughters we were to live with.

Since you may not get such a direct word from God as we did, the “who” in your situation will have to be something that everyone involved will have to determine.

WHAT – It would appear that the “what” is moving in with your children.  But, “moving in with” can have several connotations.  For example, when Mom asked if she could “move in,” I advised her that I would have Melissa, whose bedroom was downstairs, become roommates with her sister upstairs and thus make a room available for Grandma and Grandpa.  Mom immediately nixed that idea, saying, rather, she wanted her “own place.”

As you may have noted, we, too, have “our own place.”  It is attached to Melissa’s home, with the “common area” being the laundry room.  We have our own entrance, are totally “self-contained” and “self-sufficient,” and have, in no way, lost any of our independence!

There are, of course, economical concerns to be considered regarding the feasibility of allowing the parents to have their own place.  The key, I think, is allowing people to be as independent as they possibly can, regardless of their actually housing situations.

WHEN – Now, THIS may very well be the very crux of the whole situation!   We began our eventual move while there was absolutely no need for us to move out of our own home and in with Melissa!  We both were in excellent health, and Chris was working full time.  Again, we knew it was time because we all had been directly told so, and that probably is not always the case!

If you, or someone you know, is facing what you may be considered an eventual “live in” situation, let me give you a list of reasons why “sooner” is better than “later:”

There are, undoubtedly, even more valid reasons the “sooner” decision is a good one.

WHERE – This may not be as “slam dunk” as it first appears.  The idea of Chris and me moving in with one of the girls had been bantered around before, mostly in a joking manner, but that fact did make me think about the “where” aspect on more than one occasion.  Thoughts that came to mind include, but are not limited to”

WHY – Ahhhhhhh, now THAT is also a major issue!  In my estimation, and, this is only an opinion, I believe that the decision is more palatable when people get to move because they want to and not because they have to!   Often, when people “have to” it is because of such issues as illness, injury, or the death of one of the spouses.  This can have several adverse effects:

I think, and again this is only an opinion as everyone involved in our decision had been directly instructed by God as to what to do, that the reciprocal question of “why,” which is, of course, “why not,” should also be considered.   With us, there really wasn’t any valid reason not to move in with Melissa when we did.  Now, I do realize that this is not going to be the case in every family, but I am willing to wager that it is with most.  I think, and I may be wrong, that the two biggest obstacles to making this decision are pretty apt to be “pride” and “stubbornness.”

Now, at this point, I want to recognize the fact that not all parents and adult children are going to be compatible living as close together as might be necessitated with the decision to “move in” with each other.  In fact, more than one of her friends has said to Melissa, “Are you crazy having your parents move in with you?”  And, more than one of my friends has said, “I couldn’t live with my children!”  That, of course, brings us to what very well might be the most important question of all:

HOW – Again, because we were able to choose to move in and not forced to move in, we had ample time to “set the ground rules,” if you would.  And, while there were not a large number of rules, the ones that we agreed on were powerful in nature:

A quick glance lets us know what the status of the other family is.

There is one more area that is not covered with our Who, What, When, Where, Why and How string of Questions, and that is the Advantages of our living situation.  I will list a few of them here in no particular order, neither in magnitude nor as to who they benefit:

If you got the impression these are a little one sided with us “making out” the best I would agree with you!  In fact, I think that is why I am writing this Blog – to let folks know that making this decision “sooner” rather than “later” really is the way to go!!!